Showing posts from June, 2019
Show all

"From the darkness to the light": Memoirs of blind Canadian veterans of the First and Second World Wars 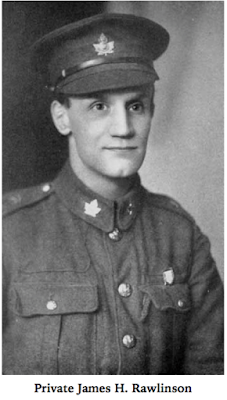 By Corinne Doria On June 7 1917 Private James H. Rawlinson of the Ontario 58 th Infantry Battalion of the Canadian Expeditionary Force was blinded by a fragment of shrapnel. He entered the St. Dunstan's Institute for Blind Soldiers and Sailors in London for rehabilitation; there he learned Braille, typing and carpentry before returning to his native Ottawa. In 1919 he published Through St. Dunstan’s to Light , a book in which he describes the drama of his wound, his rehabilitation, and his return to the civilian society. Rawlinson, James H. (1919). Through St. Dunstan’s to Light. Toronto: Thomas Allen., front page James Rawlinson is one of the several hundred Canadians who lost their sight in war, and one of the few who decided to tell their story in an autobiographical work. We can also mention Blind Date (1962) by John Windsor, and Wings of Courage (2000) by Neil Hamilton, both of whom fought in the Second World War. Born in Calgary John Windsor was an officer of Lo
Read more
More posts