Showing posts from March, 2017
Show all

Doing Public Dis/ability History – The Touchdown Exhibition at the Art and Exhibition Hall of the Federal Republic of Germany in Bonn | 29 Oct. 2016 – 12 Mar. 2017 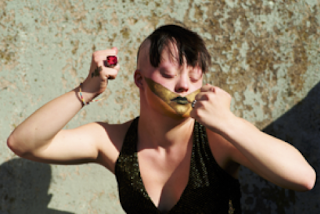 By Thea Jacob The past and present of individuals with Down syndrome – their societal and historical stigmatization as "impaired" on the basis of apparent visible and/or cognitive effects of the variance in their sets of chromosomes – is almost unknown in our society, even though one in every six hundred pregnancies worldwide involves an embryo with trisomy 21 . The organizers of the TOUCHDOWN exhibition work against this invisibility. Their main subject is the cultural history of individuals with Down syndrome; they follow the traces of these individuals in both historical and contemporary societies and exhibit historical artifacts, artwork and everyday objects by and/or about people with Down Syndrome. Johanna von Schönfeld, Ohrenkuss edition „Superkräfte“ (Superpowers) 2013 © Martin Langhorst www.lichtbilderlanghorst.de The organizers have chosen a prominent location to kick off the tour of their exhibition. Starting at the Art and Exhibition Hall of the Federal R
Read more

By Bettina Alavi and Eva Franz Located at the psychiatric clinic in Heidelberg is the internationally known Collection Prinzhorn, in which works of mentally ill artists are archived and exhibited. 1 Its founder, psychiatrist Hans Prinzhorn (1866-1933), laid the foundations for the study of art and art therapy in psychiatric context. From 1910-1921 he was hired by the Heidelberg Psychiatric University Clinic to develop an existing small art collection made by mentally ill persons. His book, "Bildnerei der Geisteskranken" ("Sculpture of the Mentally Ill"), was received by artists such as Max Ernst. Today's scholarly discussion of Prinzhorn's artists, in addition to dealing with the artistic products, also applies to the biography of the patients. The reconstruction of their life stories is based on historical medical records. 2 Historical medical records are sources that were primarily written about the patient: the doctor noted symptoms, diagnosis, and
Read more
More posts