In 2016 I organised a disability arts project in Leeds, UK called Shoddy. The project centred on an exhibition of textile-based work by disabled artists and was a showcase for some fantastic artwork. The exhibition had a few themes, including protesting the government’s “shoddy” treatment of disabled people, with huge cuts to welfare benefits and other public funding that are disproportionately affecting disabled people.
Shoddy is the name for new cloth created from woollen waste and recycled fabric. This original meaning is now largely unknown, and the word has come to mean of inferior quality, shabby, broken-down. Through this project, disabled artists challenged those assumptions that our work, and our-selves, are inferior, broken-down, second-rate or badly made.
Recognising the origins of shoddy, the project considered a number of issues and events that linked disabled people to textiles and cloth. As a member of DAN – the disabled people’s direct action network – in the 90s, I remembered how important our banners were in stating our case clearly and in instilling pride in activists. With this in mind, I pulled together some information about banners I was aware of that had been used in support of disability rights, which was published on the Shoddy blog. Here’s an updated version of the original article:

Political banners, with their traditions reaching back through the labour movement, have something in common with the Shoddy exhibition. Being fabric-based is the obvious connection, with a skilful use of embroidery, appliqué and painting to convey a strong message. Banners usually carry a message of protest or resistance, but are as often about identity, pride, unity and justice.


We are familiar with trade union banners, the banners of the women’s suffrage movement and, of course, banners that are carried on demonstrations –  sometimes quickly and roughly made, but with something to say and aiming to grab your attention.
The UK disabled people’s movement has created some wonderful, attention-grabbing banners over the years, including the legendary banner that accompanied DAN, the disabled people’s direct action network, on actions during the 1990s. The slogan “to boldly go where everyone else has gone before” was the backdrop for DAN’s campaign for accessible public transport when activists boldly handcuffed themselves to buses and trains and stopped traffic for hours.

Banners have carried the messages of the disabled people’s movement since it began. “Not Charity But Social Justice” and “Justice Not Charity” appeared on banners carried by the National League of the Blind in 1920, demanding legislation to protect their rights and guarantee a minimum income for blind workers. 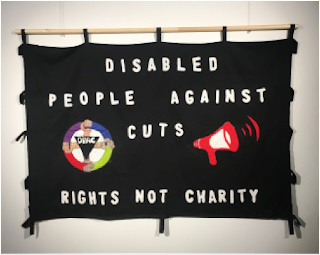 This slogan echoes down the years. It’s one of the foundations of the disabled people’s movement. DAN was formed after the Block Telethon demos of 1990 and 1992 demanded “Rights Not Charity”. DPAC (Disabled People Against Cuts) makes the same demand today, evidenced in their banner in 2015’s Art, Life, Activism exhibition at the Attenborough Centre, Leicester, which showed art informed by the politics of disability. 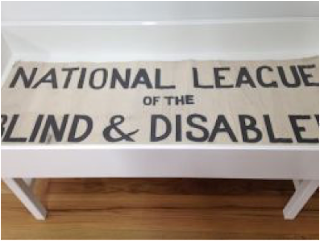 In the same exhibition, there was a later example of a banner from the National League of the Blind & Disabled, as the organisation later became.
Other UK disabled people’s organisations who have made banners for marches and demos include WinVisible, Mental Health Resistance Network and Black Triangle. 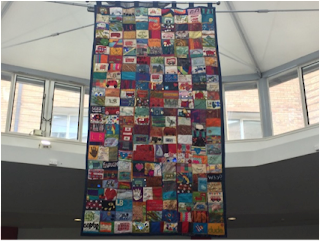 Not strictly a banner, the quilt made by supporters of the campaign seeking Justice for LB (“Laughing Boy”) or Connor Sparrowhawk needs mentioning. Connor died in 2013, aged 18, while a temporary patient in a specialist NHS treatment and assessment unit for people with learning disabilities in Oxford. He drowned in a bath following an epileptic seizure. An independent inquiry found that his death had been ‘preventable’ and the inquest in October 2015 concluded that neglect was a contributory factor in his death. The campaign seeks both justice and changes in the hospital system to prevent this happening again.
The quilt was made as part of 107 days of action taken by campaign supporters in 2014 and is a celebration of the life of LB.
In 2015, to celebrate 800 years of Magna Carta, Parliament commissioned nine artists, three of whom are disabled, to produce banners for Westminster Hall. Jason Wilsher-Mills created banners inspired by the 1834 Tolpuddle Martyrs and the 1995 Disability Discrimination Act (DDA).


Rachel Gadsden took the 1601 Poor Law and the 1829 Catholic Emancipation Act as her inspirations. Paula Stevens-Hoare marked The Great Reform Act of 1832, which extended the right to vote, and the 1967 Sexual Offences Act, which decriminalised homosexuality, with her banners.
The banners have now been gifted to different venues round the country. Jason Wilsher-Mill’s banner will be exhibited at The Art House in Wakefield later this year.
The final example of a powerful and moving banner that’s both protest and remembrance is the one created by Gill Thompson and Maggie Zolobajluk listing the names of people who have died due to benefit cuts and sanctions. Gill’s brother was David Clapson, an ex-soldier who died penniless and hungry following benefit sanctions (see short video). The banner was taken to the Government’s Dept for Work & Pensions headquarters earlier this year, along with a petition signed by 31,000 people, demanding changes to the sanctions policy. So far none have been made and the DWP continues to abdicate all responsibility for David and others’ deaths.

The work of one of the artists who featured in the Shoddy exhibition, Lesley Illingworth’s Story Telling Coat likewise remembers those who have died due to benefit cuts, pairing names of the deceased with Members of Parliament and warning that this is the ultimate price demanded from disabled people who are unable to comply with punishing work regimes.

By Emmeline Burdett   Spitting Image The British satirical puppet show Spitting Image was originally broadcast on the TV station ITV between 1984 and 1996, but it has recently been revived. As the show satirises politicians and other public figures, it is inevitable that the puppets featured in the revival are different from the ones in the original programme One of the puppets in the revival is of teenage Swedish climate activist Greta Thunberg. This has led to claims that Spitting Image is not satirising Thunberg as an individual public figure, but instead encouraging the public to regard all autistic people as figures of fun. This is far from the first time that Thunberg’s autism has been portrayed as something which makes her very vulnerable, and means that criticism of her is unfair. Some of her detractors have gone further and suggested that it also means that her perception of reality is flawed , and thus that what she says about climate change is unreliable.   The inabili
Read more

By Sophie George This article is based on a wider dissertation on ‘The Changing Attitudes Towards Down syndrome in Post War Britain’ written in 2019. It discusses the role of parental advocacy as a force for evolutionary change towards the inclusion of people with Down syndrome in post war Britain. I will therefore be focusing on the movements towards integrated education and the process of de-institutionalisation, as well as commenting on the introduction of the pre-natal test and its effects on the parental community.  At the start of the post war era, most children with Down syndrome were transferred to institutions and many were deemed ‘uneducable’. With the help of the parental movement, institutions were improved, community living was becoming a reality and education for people with intellectual disabilities like Down syndrome was more accessible and integrated. Whilst the parental movement helped change attitudes towards Down syndrome, it was not revolutionary and represents a
Read more