Picture: An example of an almanac of a similar style and period as Daniel George’s. Entitled ‘The New-Jersey Almanack for the Year of our Lord 1779’, printed by Isaac Collins in New Jersey. Image sourced from Rutgers University Library and in the public domain.

In 1775, seventeen-year-old Daniel George, a ‘student in astronomy’ from Massachusetts, composed an almanac. In an eclectic fourteen pages of printed text and tables, he recorded the rising and setting of the sun and the moon, the location of the planets, the tides, the weather, Quaker Meetings, ‘Remarkable Days’, ‘Liberty Days’, and poetry. He also included ‘for the use of the gentlemen officers and soldiers in the American army’ a narrative of the Battle of Concord, recently fought at the outset of the Revolutionary War. George had studied mathematics and astronomy extensively, and the almanac was the result of painstaking calculations throughout the year. In August 1775, George and his father visited the Reverend Samuel Williams, who was known for his interest in astronomy. Seeing the quality of George’s work, Williams forwarded the almanac to Salem printer Ezekiel Russell, including a letter of recommendation.

A shrewd marketer, Russell published George’s almanac in 1776 under the title: ‘George’s Cambridge Almanack … By Daniel George, a Student in Astronomy at Haverhill, in the County of Essex, who is now in the Seventeenth Year of his Age, and has been a Cripple from his Infancy.’ He also printed Reverend Williams’ endorsement, which included further details of George’s impairment. Williams began by noting his initial impression of George as ‘a singular object of pity and compassion’. However, the Reverend noted, ‘with all the disorders of body under which he labors, his mind does not seem to have been at all affected’. Williams went on to recommend the almanac’s publication and praised George’s intricate calculations as ‘equal to other compositions of that kind’ and indicative of ‘rising genius’, despite his ‘singular situation’. He closed his appeal: ‘…if you favour the productions of a Cripple, in the seventeenth year of his age, it must not only give pleasure to him, but to the benevolent and humane who wish success to the ingenious and comfort to the wretched.’

‘an image of a person with a disability, often a kid, doing something completely ordinary – like playing, or talking, or running, or drawing a picture, or hitting a tennis ball – carrying a caption like ‘your excuse is invalid’ or ‘before you quit, try’ (Young, 2012).

‘Since then, use of the term has expanded to incorporate any media which generally exploits disabled people as objects of pity or condescension to evoke an uplifting moral for the benefit of the non-disabled viewer’ (Ladau, 2019). Ubiquitous across the internet and painfully familiar to the disabled community, these depictions perpetuate a number of harmful tropes. 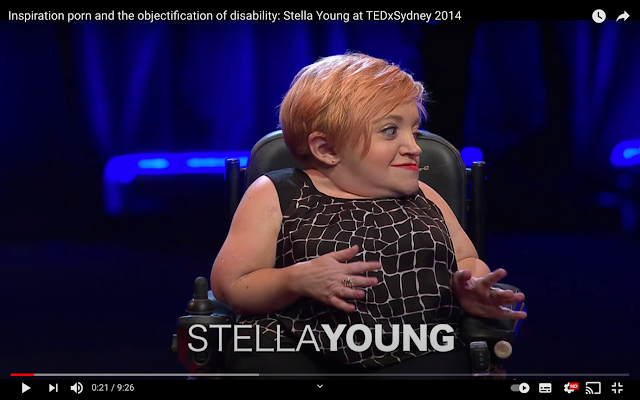 The ‘inspiration’ fundamental to inspiration porn usually rests on the assumption that impairment is an entirely debilitating experience. Disabled people’s acts and achievements are therefore framed as automatically exceptional; by living with their impairment they are ‘overcoming’ it. Reverend Williams’ earnest assurance that Daniel George’s ‘mind does not seem to have been at all affected’ by his impairment, and that his almanac ‘seems to be equal to other compositions of that kind’, betrays his apparent low expectations for George’s abilities. Behind his need to convince the reader of the young man’s achievement is a distinct sense of both surprise and marvel – George’s ‘genius’ is all the more remarkable because of its unlikelihood due to his ‘uncommon disadvantages’.

From his repeated emotive references to the ‘wretched’, ‘distressed, ‘unhappy Cripple’, it is clear that Williams was keenly aware of the marketable potential of George’s work – not simply due to its merit, but because ‘the singular situation of the author, bids fair to engage the popular attention’. Part of the novelty of the almanac, regardless of its quality, was in the fact that someone with a physical impairment had written it. This clear objectification of George’s impairment for the sake of intrigue is a starkly reminiscent of inspiration porn, where disabled people’s stories and achievements are exhibited for the benefit of an audience that is assumed to be non-disabled. Reverend Williams actually appeals directly to a readership of the ‘benevolent and humane who wish success to the ingenious and comfort to the wretched’, creating a clear distinction between the charitable able-bodied audience and the impaired object of their compassion.

In eighteenth-century North America, the clear distinction between ‘ability’ and ‘disability’ that inspiration porn rests upon had not yet solidified. Historians of impairment in early America have engaged with the social model of disability to explore how cultural constructions of incapacity manifested in this period. They have noted that, though the word ‘disabled’ was often used in the eighteenth century, it did not become a defined or comprehensive social category in the United States until at least the early nineteenth century. This is not to say it was a ‘golden age’ for people with impairments. Daniel George’s physical condition clearly affected his experiences and interactions, and some harmful connotations accompanied the other emotive labels Williams gave him. However, in the eighteenth century an individual’s physical health was always vulnerable and the line between physical capacity and incapacity was tenuous. It was an era of debilitating epidemics, rudimentary sanitation, harsh climates, dangerous labour and an ever-changing medley of medical practices. George’s New England audience may not have read about him and thought ‘well, it could be worse... I could be that person’, because their own day-to-day experiences of precarious health did not induce them to distinguish so drastically between disabled and non-disabled bodies.

The intended purpose of Reverend Williams’ endorsement is also crucial here. Though his wording is emotive and emphasises the peculiarity of George’s ‘uncommon disadvantages’ and ‘rising genius’, this was a fairly standard tone for a patron advocating for a protégé in need of financial support. Most eighteenth-century readers were familiar with various forms of physical impairment due to their everyday involvement in practical and financial support networks for local families, individuals and even strangers. Poor relief in the colonial era was based in the community, and routinely involved provision for people with illnesses and impairments who were partially or wholly unable to labour. Their livelihoods were often a mixture of sponsorship from the local government or private charity, with local churches frequently responsible for the collection and distribution of aid. It was therefore fairly usual for church ministers like Williams to appeal to a community’s sympathies and sense of religious moral duty to gain financial support for a local person in need. George himself thanked his ‘public-spirited Friends and Countrymen’ for purchasing his almanac because they were ‘helping one who is not able, or perhaps ever will have it in his power to help himself’. When Williams and George addressed the almanac’s readers, they did so not to ‘inspire’ a non-disabled audience, but to generate a livelihood.

Furthermore, the devaluation of disabled people’s achievements that runs through inspiration porn was configured differently in the eighteenth century. The flexibility of the household economy and interdependency of local communities, especially in rural areas, often allowed early Americans with impairments to participate in various forms of labour adapted to their needs. Indeed, intense cultural expectations of industriousness from every member of a community required that people with impairments be seen to make some effort to use and develop their skills for the benefit of themselves and the community. George’s almanac was not impressive to Williams because it was ‘inspiring’, but because the young man was clearly conscious of his physical limitations and embracing an alternative avenue by which he could contribute to his community.

This is a rare direct account from an eighteenth-century American with a physical impairment, which makes it all the more significant that George barely mentions his condition. Once he has thanked Reverend Williams and the printer Ezekiel Russell, and acknowledged the help that his ‘kind and generous Patrons who may venture to expend four pence’ would provide, he moves swiftly on. He describes in detail the ‘other excitements’ that may be more interesting to his New England readers than his impairment: the ‘heroic deeds of your brave and renowned Countrymen who so remarkably distinguished themselves in the late Battle of Concord’. For the remainder of the almanac, George is concerned only with providing calculations and observations ‘at least as useful and entertaining as any studied by Gentlemen of more riper years’.

Daniel George’s almanac proved so successful that Russell printed a second edition with additional material. The following year, he composed a new almanac for two further printers in Boston and Newburyport. Between 1776 and 1787, George’s annual almanacs were distributed widely in towns across New England. His physical impairment never seems to have been mentioned beyond the first issue. George eventually moved to Maine and became a printer himself, as well as a schoolteacher and the owner of a small bookstore. In 1800, four years before his death, he became the sole owner of a Maine newspaper (Griffin, 1874).

Meg Roberts is a PhD candidate at the University of Cambridge, researching disability and caretaking during the American Revolutionary War.

Griffin, Joseph, History of the Press of Maine (1874), Book Collections at the Maine State Library, p. 36.

By Emmeline Burdett   Spitting Image The British satirical puppet show Spitting Image was originally broadcast on the TV station ITV between 1984 and 1996, but it has recently been revived. As the show satirises politicians and other public figures, it is inevitable that the puppets featured in the revival are different from the ones in the original programme One of the puppets in the revival is of teenage Swedish climate activist Greta Thunberg. This has led to claims that Spitting Image is not satirising Thunberg as an individual public figure, but instead encouraging the public to regard all autistic people as figures of fun. This is far from the first time that Thunberg’s autism has been portrayed as something which makes her very vulnerable, and means that criticism of her is unfair. Some of her detractors have gone further and suggested that it also means that her perception of reality is flawed , and thus that what she says about climate change is unreliable.   The inabili
Read more