George Thompson worked at Gotts Mill, now Leeds Industrial Museum at Armley Mills in Yorkshire, UK, in the 1840s. George’s job was as a handle-setter, putting teasels into metal frames which were fitted onto a teasel-raising gig. This machine was used in the finishing stages of cloth making, there’s an example of one in the Industrial Museum. The cloth would pass over the spines of the teasels in the gig to raise the nap of the fabric. It was then cropped to give it a smooth surface.

George was a young man who lived near the mill in Armley. Jobs preparing teasels for cloth-finishing were usually done by young men and boys, and perhaps George had started work as a preemer, sorting and cleaning the teasels. His boss reported that George “acquired the business equally fast, and as well as others” and reckoned that “when he is of age he will be able to earn as good wages as any other men in the same employment”.

How do we know this about George and why did his boss make these remarks?

In the 1840s and 1850s, the Yorkshire Institute for the Deaf and Dumb (now Doncaster School for the Deaf) sent a survey out to employers and families of former pupils of the school. The responses formed a series of reports (YIDD 1844, 1859). George was one of many pupils who went on to find jobs in the textile industry in Leeds and the region.

I’m an independent disabled curator and I’ve been researching the lives of people like George, to show that Deaf and disabled people are part of our history and contributed to society. Disabled people are often portrayed as dependent or as burdens, in the past as well as today. And a common assertion in disability studies is that industrialisation excluded disabled people from work (Barnes 1991; Finkelstein 1981). However, disabled people have always been part of the workforce, although this is rarely acknowledged and disabled workers’ stories are often hidden.

I've focused on disabled people who worked in textile mills, from the Industrial Revolution onwards. I became interested in this topic when I organised an exhibition called Shoddy a few years ago. Shoddy showed textile-based artworks by disabled artists. As well as looking back at the textile industry, the exhibition commented on contemporary society’s often shoddy treatment of disabled people, with cuts to benefits and public services.

I shared some of my research with a group of disabled people at an event at Armley Mills Industrial Museum in November 2021. This event was part of Leeds Museums and Galleries’ 200th birthday celebrations, and also fell within ;UK Disability History Month. Thanks to all the museum staff who supported this event. Being in the surroundings of the mill, with its large collection of textile machinery, set the scene for thinking about life for disabled mill workers and the harsh and hazardous conditions they faced. 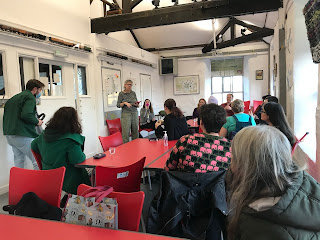 Industrial injury was a feature of early factory work, from lost limbs to severe respiratory problems (see, for example, Sadler 1832). There would therefore have been a high proportion of mill workers who had some sort of impairment. This didn’t necessarily mean that they were no longer productive, and many of these workers continued or returned to work.

They had little choice, they would have wanted to avoid the even harsher conditions of the workhouse if at all possible. The workhouses were run on the principle of “less eligibility”, meaning that the standard of living there was lower than anywhere else. Of course, there were people whose injuries meant that they were no longer able to work, and did end up in the workhouse. But many other disabled people stayed in the factories, through sheer necessity, or because they were still considered to be useful and experienced workers.

One example was William Dodd, who described himself as a ‘factory cripple’ in his account of his working life (1841). He mentions other disabled people who worked in the mills. Dodd tried to get other jobs, but they didn’t work out and he was dismissed. Still, he didn’t go to the workhouse, but returned, as a disabled person, to the woolen mills.

Dodd started out as a piecer, but after he realised he would be working in the mills long-term, he managed to get a slightly better job, ‘where the labour was not so very distressing, but the care and responsibility was greater; and although I was a complete cripple, I now began to feel a little more comfortable.’ (Dodd, 1841: 16).

Workers didn’t just accept the terrible conditions passively. In the 18th and 19th centuries workers started to come together to resolve issues at work. If the textile workforce had a high proportion of disabled workers, then it follows that these emerging trade unions would also have had many disabled members. Turner and Blackie (2018) show that this was certainly the case in coal mining, where disabled miners were active trade unionists. Disabled people were shaping the world of factory work, fighting to improve conditions for themselves and the workers who came after.

One of the most striking features of textile mills was the great din produced by rows of spinning mules, power looms and other machinery. The noise made by a single spinning mule at Armley Industrial Museum gave some idea of what it would have been like. As a result, hearing loss was common amongst mill workers, it was practically taken for granted. This continued to be an issue well into the twentieth century. People who became deaf in this way would carry on working in the industry which, after all, did not require its workers to be able to hear over the racket of the machines. Indeed, workers developed sign language to communicate.

Janet Alexander, a Deaf theatre professional and actor, skilfully brought the story of another of the Doncaster School’s former pupils to life at the event. Janet performed a monologue as Sarah Hartley, a bobbin-winder at Dickinson and Barraclough’s worsted factory in south Leeds.

Taking the limited information about Sarah, along with general knowledge about mill workers’ lives, plus her specific knowledge and understanding of the history of Deaf people in Leeds, Janet created a rounded and relatable character.

Sarah was described by her boss as a good learner with ‘proper’ conduct. However, he wrote that ‘She is not quite so even-tempered as other girls in the same employment.’ (YIDD 1844-1859). Janet gave us a real insight into the life of Sarah, a spirited, proud young Deaf woman.

Vickie Orton, a disabled textile artist and storyteller, drew on her family history to tell us the more recent account of her great aunt Gladys who worked in a mill over in Lancashire. She worked there from the age of 14 till 65, retiring in 1978. She had become deaf and was an expert lip reader. This skill was a badge of honor amongst the hard-working weavers. It showed that you’d had a “proper job” on the factory floor, rather than a white collar job in the mill offices.

In the past as today, disabled people want to work, to be independent and to be part of the community, although the world of work is not always supportive of disabled people. In discussions at the end of the November event,participants felt that the media bombards the general public with stereotypes of disabled people as scroungers and of being unable to work, and this is perpetuated by the benefits system. Disabled people need another narrative that challenges these stereotypes and shows the contributions that disabled people have made to society.

Gill Crawshaw is a curator based in Leeds, UK. She draws on her experience of disability activism to organise exhibitions and events which highlight issues affecting disabled people. Gill Crawshaw is interested in the intersection of disabled people's lives with textile heritage and with contemporary textile arts.

Dodd William. 1841. A Narrative of the Experience and Sufferings of William Dodd a Factory Cripple. London: L&G Seeley.

Finkelstein, Vic. 1981. ‘Disability and the helper/helped relationship. An historical view’ in Brechin, A., Liddiard, P. and Swain, J. (eds) Handicap in a social world. London: Hodder and Stoughton.