Showing posts from October, 2018
Show all

People of short stature as representatives of the gods? 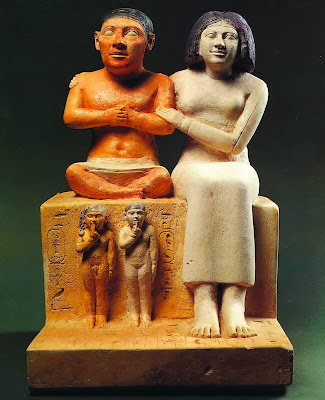 By Bert Gevaert, PhD Seneb and his wife Senetites (ca. 2520 BC) (Egyptian Museum, Cairo) People of (unusually) short stature 1 are extremely popular in art: portrayal of people with so called ‘proportionate’ or ‘disproportionate’ short stature (usually achondroplasia) can be found all over the world and through the entire history of mankind. People of short stature were popular in ancient Roman and Greek art, but also in Asian, African and Latin American cultures. Fascinated by the tiny appearance of their fellow human beings, artists from Classical Antiquity till today liked to sculpt, cast, draw, paint, photograph or film people of short stature. Do these persons remind them (and us!) of ancient mythology about people of short stature living in faraway places? Do they attract us by their doll-like features? Are they funny, simply because they are smaller than ‘normal’ people? Some people consider them as more than funny, in their opinion they are ridiculous and for them they
Read more

“Just like everyone else”: Studying constructions of ‘normality’ through attitudes towards conjoined twins

By Helena Franzén, Uppsala University In 1996, the American conjoined twins Abigail and Brittany Hensel went on the Oprah Show and spoke about their daily lives and their wish to impress upon the viewers how they both were quite ordinary people. Documentaries followed and they got their own reality show at TLC. In the show, the audience could follow their everyday life; at home, in school, and when doing extracurricular activities such as taking their respective driver’s licences. The viewers were also allowed to access the twins’ hopes, dreams, and plans for the future. Abigail and Brittany portrayed themselves as having two quite different personalities and expectations on life, and went on air to counter preconceptions about conjoined twins. By showing the public how normal they actually were, they wanted to demystify the condition. They were two young girls who wanted to raise awareness and be treated as the regular persons they were. The Youtube clip below shows one of the first
Read more
More posts